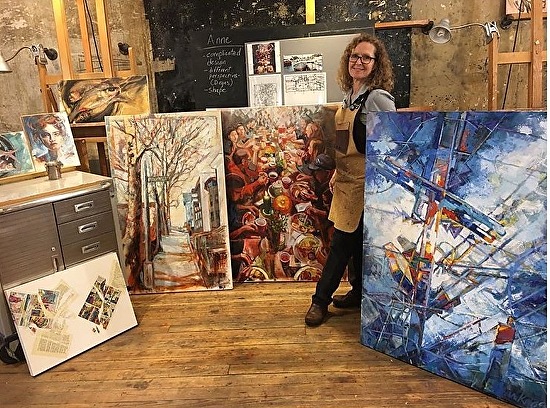 Painter Anne Pell Harkness gravitates towards subjects with a strong graphic image. Town scenes, chairs and telephone poles are among her favorites. Even as a young girl, Anne responded to clean crisp shapes and ads with witty, simple headlines. By grade school, she was pulling ads out of magazines to tape up on her bedroom door.

Harkness grew up surrounded by artists. Her mother was a painter; her grandmother, a sculptor and painter; her dad, an aspiring architect; one brother an architect and a photographer, and her other brother was a builder and painter. Her grandfather traveled the world buying failing newspapers, turning them around then selling them, while his wife, Anne’s grandmother, painted and collected art. Thus, Harkness grew up in a home filled by paintings and lithographs by Pablo Picasso, Valmink, Utrillo, Renoir, Toulouse Lautrec, Andrew Wyeth, and present-day painters from around the world, such as Asoma, Jegart and many Japanese and French painters.

As a child, Anne modeled for her mom and grandmother in their perspective studios and a sculpture of Anne, fashioned by her grandmother, now sits in her backyard. Drawing was a big part of growing up. As Anne recalls it, she and her brothers drew every day while seated at the marble-topped table in their sunroom. She also sketched her family as they watched tv in the evenings.

When the time came for college, Harkness feared a career as an artist wouldn’t generate a living wage. She admired design, so graphic design was a natural path. She attended the Atlanta College of Art and earned a Bachelor of Fine Arts in Graphic Design from The Maryland Institute College of Art. Her first job out of college was at a small newspaper in Annapolis MD.

Anne married Larry Harkness, her childhood sweetheart who graduated from Cooper Union in New York City. Joining him there, Anne found work as an art director doing package and product design, logos, and hand lettering. This taught her about proportion, color, and design, but she chafed as her artwork was constricted and controlled. She felt she was expected to be a well-behaved little girl staying inside the lines.

Anne’s life changed again when she and Larry had two children. She quit her corporate job to homeschool the children, and tutor other children in reading. This allowed pockets of time in which she used photography, colored pencil, and watercolors as creative expression. The Harkness home always had a drawing table in the dining room with some piece of artwork being created. Her children, in turn, became her models for various projects and illustrations. Her tutoring led to creating board games which made learning more fun for her students. During this time, her church commissioned her to paint a large piece: a 30 x 9’ painting in acrylic of a multitude of peoples’ faces. It took four years to complete.

Eventually, after a few failed career attempts, and other low spots, Harkness felt she was at the bottom of the barrel. Her mother continued to urge her to paint, so when her husband suggested she and her brother take an oil painting class, she agreed. While her brother quickly realized he preferred watercolors, Anne had the opposite response. She became so filled with the joys of oil painting that she simply couldn’t contain it. Her husband reflected, “All that came before was preparation for this.”

After 56 years, Anne found her passion and gave herself permission to follow it. “Letting my creative juices flow gave me great joy! Well-behaved girls stay inside the lines and seldom change the world. But I am using the lines to my favor and definitely not staying inside them.” Harkness found it both terrifying and extremely gratifying to be doing something new. She began to study under painter Curt Butler. He soon asked her to work as his studio manager and later as an instructor. Butler taught her how to paint and how to teach. They now each paint professionally in their respective studios.

As a contemporary artist, Anne looks for a unique point of view and often finds unexpected beauty in what many would consider an ordinary or unattractive subject. She uses line in a unique way in her paintings. The artists she admires and is most influenced by are Staprans, Diebenkorn, Degas, Japanese prints, Toulouse Lautrec, Klimpt, Schwartz and Rutenburg. Harkness still gravitates to art with a strong graphic image and a unique point of view. She loves the buttery texture of oil paint. Harkness seeks to retain the lines and layers that lie underneath so they show in the finished work. She treasures the process, saying that painting is like life, with its many layers peeking through the finished work.

Anne’s pieces have been in national and international shows, galleries and museums. She has been featured in American Art Collector Magazine, Fine Art Connoisseur Magazine, and International Artist Magazine, which awarded her 2nd place in their Abstract/Experimental Art international competition. She is represented by Providence Gallery and Vision Gallery in her home state of North Carolina. She is a member of American Women Artists and other groups.

Anne uses the elements of line, shape, and color to support her design focus. The principles that most interest her are balance, rhythm, and movement, “Cause, we gotta’ dance!” Her hope is that you will never tire of your travels through her paintings.

“Great art captures something unexpected. Its beauty strikes at our very core. The artist gives something of themselves to the artwork and that is what calls to people. Great art is more than just technical skill; it has to draw the viewer in, tell a story, or emote a feeling we want to keep experiencing.” –Anne Harkness

“Art has many roles. It documents the world in which we live. Since the artist is often struggling with something (as do most people), their artwork contains some of that struggle and sometimes the viewer gets fresh understanding. In times of grief, we seek beauty to hold onto, as if it contains a little bit of the Divine. We want to hold on to the eternal, even if we don’t believe; we want to hold on to hope. Something in us grasps for that beauty as if it is life itself.”  - Anne Harkness

A native of NC, Anne Harkness is an alumnus of the Atlanta College of Art and earned a Bachelor of Fine Arts in Graphic Design from The Maryland Institute, College of Art. Her work as an art director in NYC for 15 years has embodied her work with a graphic element that astute viewers can detect in her paintings. For 5 years, Harkness studied painting under and worked for Curt Butler, a renowned oil painter. As a contemporary artist, Anne seeks to capture a distinct point of view, often finding some unexpected beauty in locations or views others would easily dismiss as ordinary.

Working from her love of subject matter with a strong design element, Harkness also focuses on the importance of line in her work. Anne credits her emphasis on these particular components to her love of drawing and a desire to retain the looser marks that give a piece a more rustic, unfinished quality. Anne also looks for the surprises that come from spending time in a painting. These discoveries are her treasures and assure that she is always learning and seeking the ‘new-fresh’ for her work.

Statement About Work Selected for Exhibition

You may ask, with a title like Let There Be Music, why aren't these paintings all about music. My reply would be, painting what I love causes me to sing and dance. Actually, while painting I do sing and dance because I get to do what I love and I am so thankful for the privilege. A painting will be charged with the feelings and mood of the painter, and on some level the viewer will receive that vibe, whether they know it or not.

When I see a sight that I want to paint, it is often something I wasn't expecting, as I come around the corner or walk into a room. I'll photograph it. Then if the photo captured what excited me, I may paint it. If there is enough passion to get me through the painting then I'll paint it. That is why occasionally while someone is looking at one of my paintings they may say I have never been so joyful looking at telephone poles before!